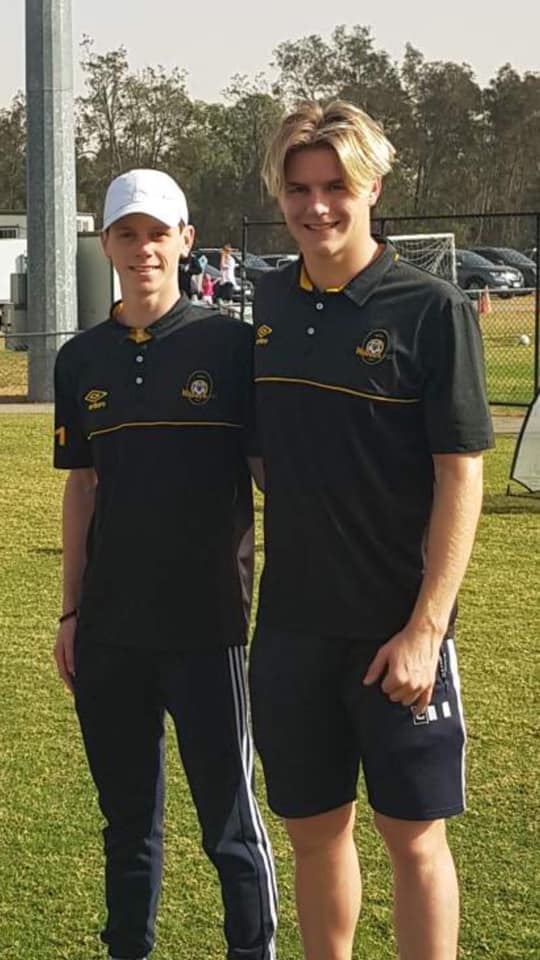 GAP year plans have already been locked and loaded for two young Wynnum Wolves footballers who will head interstate in November to take up Academy positions with the Central Coast Mariners A League club.

The two 17-year-olds, Jacob Krayem from St Joseph’s Nudgee College and James Taylor from Iona College, have accepted Academy positions with the Mariners for the 2020 season after impressing at a youth trial with the A League club in Gosford in August. The trial was organised by Wynnum Wolves’ 2019 first team coach, Kerwin Jean-Pierre, who has worked
with the boys at the Bayside club over the past two seasons.

Both boys played Under 18, Under 20 and senior men’s football with Wolves in 2019 under the direction of Jean-Pierre, who has long been a passionate advocate of youth development in football.

The Wolves teenagers will both graduate Year 12 on November 15 th in Brisbane and then report for training with the Mariners on Monday, November 18 th for a five-week pre-season training block. After the Christmas break they will relocate fulltime to the Central Coast of New South Wales from January 13 th next year. Krayem and Taylor are amongst the youngest players recruited by the Mariners for their 2020 Academy squad which comprises approximately 50 players to cover its Under 18, Under 20 and Senior Men’s teams in the New South Wales NPL competition, as well as its National Youth League team.

Wynnum Wolves’ FC Technical Director, Ken Mitchell, believes both boys possess the necessary skill, attitude and dedication to be successful at the next level. “It just goes to show that there are opportunities out there for any players who have the right attributes and are prepared to work hard,” he said. “I have every confidence that the boys will do both themselves and Wolves’ proud.”

Mitchell said both boys had benefited from the Wolves’ coaching philosophy which was based squarely around youth development, both on and off the pitch, and creating opportunities for its young players beyond the local football environment. Taylor has been at Wynnum Wolves’ for the past three-years, staring in the club’s Under 15 QPL team after a move from Southside Eagles, while Krayem is a former Northern Fury junior NPL player. He has previously represented at Queensland Country Under 13 and Under 14 level, and Queensland Schoolboys Under 12 and Under 15 level before relocating to Brisbane from Townsville, to attend St Joseph’s Nudgee College. Both have played first team football for their schools in the AIC (Iona) and GPS (Nudgee) competitions over the past two years.

Wolves FC wishes them the best of luck!