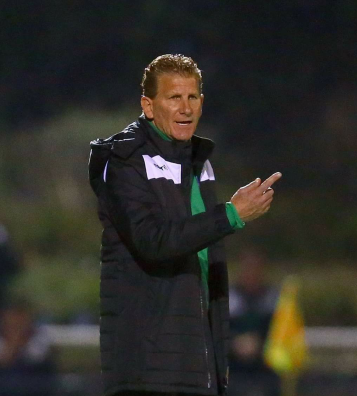 Wynnum Wolves FC is delighted to announce that Pro-Licence Coach, Claudio Canosa, will be the Bayside club’s new Technical Director for the 2021 Season.

Canosa will take over the role from departing TD, Ken Mitchell, who has decided to return to Townsville permanently for family reasons. Wynnum Wolves FC would like to thank Ken for his exceptional service to the club over the past 18 months and wish him all the best for the future.

Canosa will officially start full-time with Wynnum Wolves FC from Monday, November 9th, but will continue to oversee weekly training sessions at Carmichael Park and be involved in planning for the 2021 season while completing his 2020 coaching commitments with the Gold Coast Knights. He is already well acquainted with many of the current Wolves’ juniors, having conducted holiday camps at the club, and via his weekly training contacts with SAP, Academy and NPL Junior teams.

Wynnum Wolves FC President, Rabieh Krayem, said the Wolves’ board was extremely excited to have attracted a coach of Claudio’s calibre and standing.

“I honestly believe there would be few coaches in Queensland, let alone Australia, with the breadth of knowledge and experience Claudio has in the game,” Krayem said.

“Not only is he a Pro-Licence Coach, he has held Technical Director and Head Coach roles at a number of clubs in New South Wales, Victoria and the ACT; he has worked in the High Performance space in the sport at both State and National level; he has worked alongside coaching greats Raul Blanco, Eddy Thompson and Les Scheinflug as a Technical Film Analyst for the Australian Olympic team; and he boasts glowing references from some of the most high profile and highly credentialled coaches and coach-educators in the country including Kelly Cross, Rale Rasic, Blanco, Scheinflug and Peter Kelly,” Krayem said.

“As a player, Claudio played 200 NSL games and still holds the reputation of being one of the most uncompromising central defenders in that competition over the years he played. Our current Club Ambassador, Frank Farina – who played against him – will attest to that.”

“What is exciting for our club is that the depth of Claudio’s resume is equally matched by the depth of passion and excitement he brings to role he is stepping into at Wolves.

“Claudio is a true professional who I know will work tirelessly to lift the standards of the junior program here at Wynnum Wolves to match and support the excellent work Matt Chandler and his staff have done with our Senior program in 2020,” Krayem said.

Canosa is equally excited. “We need to put in place professional foundations from the SAP years right through the Junior age groups,” he said. “We need to lift standards across the board, starting from the moment we come back to pre-season training at the end of November.

“Our Junior program is now at the Development level and building. The goal must be to work towards promotion to the Academy level over the coming seasons.

“I believe young players with talent and ambition and the right work ethic should be excited to be a part of this club. As you can see already, we have two 18-year-old players currently playing as part of our First team, so the pathway is clear for young players who want to put the work in.

“This is a club with great facilities, passionate and dedicated people and wonderful potential to build towards a National Second Division team in the future. I am very excited to get started on our plans for the 2021 season,” Canosa said.

Wynnum Wolves Head Coach, Matt Chandler, said he was looking forward to working alongside Canosa to ensure the club continues to build on its goal of promoting homegrown players into the ranks of the First Grade squad in future seasons.

“I’m very encouraged by my initial discussions with Claudio around his thoughts on youth development and preparing players for their eventual step up to Senior Football,” Chandler said. “I am really looking forward to working with him over the new few seasons to move our club forward.”

Wynnum Wolves FC would also like to offer a huge vote of thanks to A Licence Coach, Sean Lane, who has worked as the club’s acting Technical Director over recent months.

“Sean has offered fantastic support and guidance to the club, our players and our young coaches over the past few months as we’ve gone through a transition period. His support and guidance has been invaluable,” Rabieh Krayem said. “Sean, like Claudio, has developed a great affinity with our club over this time and he will continue to offer technical support to Wolves, where needed, until such time as Claudio takes over the TD reigns on a fulltime basis.

“Both men are consummate professionals who are committed to lifting the standards of youth development in Football. We are extremely fortunate to have both men working with our junior program here at Wolves,” Krayem said.